There is always a face, story, song or event behind my stories. My hope for this page is to share with you all where the stories begin. Now, not every book has a handpicked model for the cover; but, I have had the pleasure of choosing a few. Below you can meet my models and see the inspiration I've gotten for the characters....Think of this like a "behind the scenes" look. 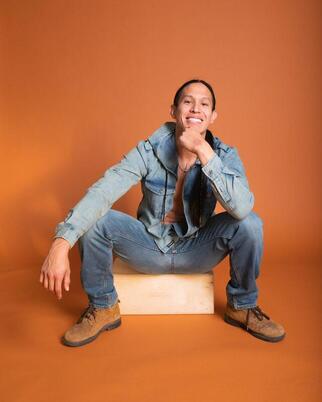 Jeremy "JP" Gauna is a Choctaw Native American and Hispanic actor/model. He treasures the opportunity to represent the Choctaw Nation of Oklahoma and his Mexican heritage. Born and raised in the great state of Texas, he was an all-state athlete in high school and a dual-sport college athlete that advanced to play semi-pro basketball for the Oklahoma Stallions in OKC. He now resides in Dallas Texas, acting and modeling.
Jeremy gratefully and humbly loves all opportunities he has been blessed with to date. Everyone he meets is a friend and valued contact. He never misses an opportunity to get to know everyone on a set and learn anything and everything he can absorb. When you meet JP, you will quickly fall to his charm, quick sense of humor, and laugh; all are infectious.

His mantra: "If I can make one person smile a day, then I am doing something right!". He believes humor and constructive communication is the key to ending racism and with more laughter and less focus on hate, everyone can come together. 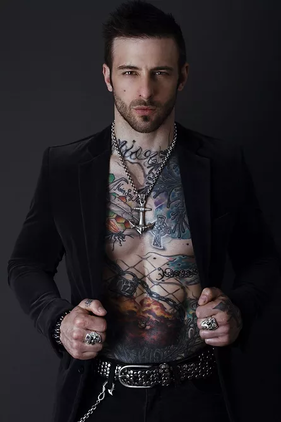 www.thenickhawk.com/Sneak Peek at a model for my November Release!!!
I was born on September 3, 1981 in Madison, Wisconsin as Nicholas Haas. Having little money and being scared of my shadow eventually motivated me to become confident and successful. I have worked well over 100 different jobs starting with newspaper delivery and farm work from an early age. I would work before school and play sports after. I lettered four times in wrestling and was captain of my wrestling team my senior year. After graduating high school, I attended college for a year in Wisconsin and continued my wrestling career. I ran out of the little money I had, left college and almost lost myself by partying my life away. I decided I needed to get away, and fast. I Joined the Air Force for a four-year-tour so I would receive the GI Bill to have the rest of my college paid for. I was an Air Force Marksman and passed all of the tests to become Air Force special ops but I decided to transfer into a job where I was able to attend college full-time. 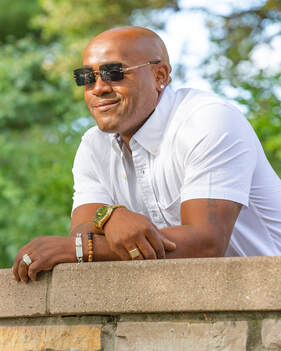 Model on the Cover of Sugar & Spice!!!
​Nicklaus also known as Nick is a Ponca City, Oklahoma native and the third out of four children. Currently he is residing in Minnesota with his wife and kids. Outgoing, smart, charismatic and well-rounded. Nick began his modeling career just a short while ago. It’s always been a passion of his as well as physical fitness. He is a man of many talents but a family man first. He is a concrete worker by day. Nick enjoys taking his boat out in the summer months, football, going to the gym and traveling. He is always up for trying new things, whether it be foods or activities and meeting new people. 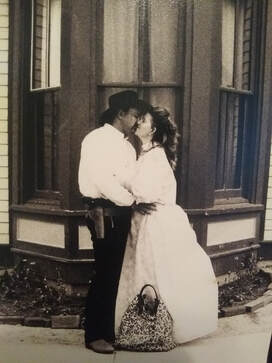 Guthrie Sister Series was inspired by several things. So I have chosen just a few. When I went to Guthrie Oklahoma I walked the streets and got a feel of the town's history also allowing the birth of the characters. I wanted each sister to have her own identity and story. Each sister starts out in Guthrie then quickly moves to a new city.

Lillian starts out in Guthrie and quickly moves to Dodge City. Because I wanted to feel the steps of my characters'  I went to Dodge City with my husband. We went to a Christmas ball dance that was model after the 1890s. Lord we learned dances from that time. I even danced with Wyatt Earp haha. We heard stories from the era around a campfire. Even ate food that the church ladies had prepared for the event. Truly I was in my element. Here is a picture of my husband and I in Dodge city! 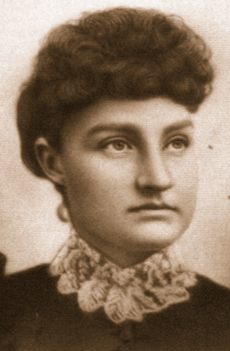 Annabel like Lillian went to Dodge City. Annabel worked in The Long Branch Saloon. I had the honor of having a drink at the same saloon.  Annabel is a lot like my young sister Shannon, both are firecrackers. Annabel's story was also modeled after a saloon girl's true-life story Lottie Johl. Lottie's life story is very sad. If you ever want to know more about her story lookup Bodie California. You won't be disappointed. Take a look at  her confidence radiating out of this picture.
Well, that leaves us to Rebekah which reminds me of a lot of my younger sister Heather. Rebekah like her sisters leaves Guthrie joining one of the famous women that started the temperance movement Carrie Nation. Rebekah ends up in Caldwell Kansas. I had not been there both so I had the honor of meeting up with some Belles that showed me the history of Caldwell. As I walked the streets listening to the Bellas  I felt Rebekah's story come to life.
Rebekah's personality is a lot like my youngest sister Heather both are protective and fierce when it comes to family. Rebekah sings with the voice of an angel, just like my sister Heather.  I truly love this series. ​ Check out these sweet Belles below! 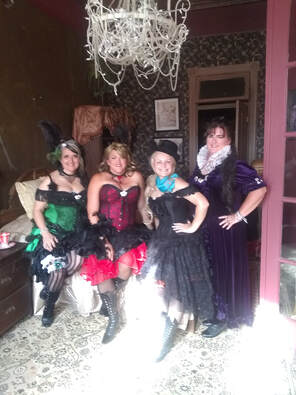 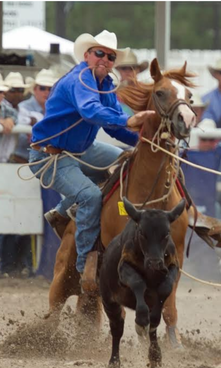 ​Beyond the Stars
​
Beyond the Stars was inspired from one night at the 101 wild west rodeo in Ponca City Oklahoma. As I sat in the stands with my husband I had no intention to do a story. Although I do carry an idea book in my purse just in case I run into something that interests me.
As the rodeo started my attention quickly went to a  cowboy Jerome Schneeberger. I  didn't know much about the man. Actually to this day, I have never met him.  His performance in the arena was amazing from the way he carried himself and his horsemanship. Throughout the night I notice how people reacted to him, how they greeted him with handshakes and smiles slaps on the back. He was definitely admired by many. I thought to myself he would be a great character.
That night I went home and the story of Beyond the Stars was birth.